A Day in the Life of an International Student 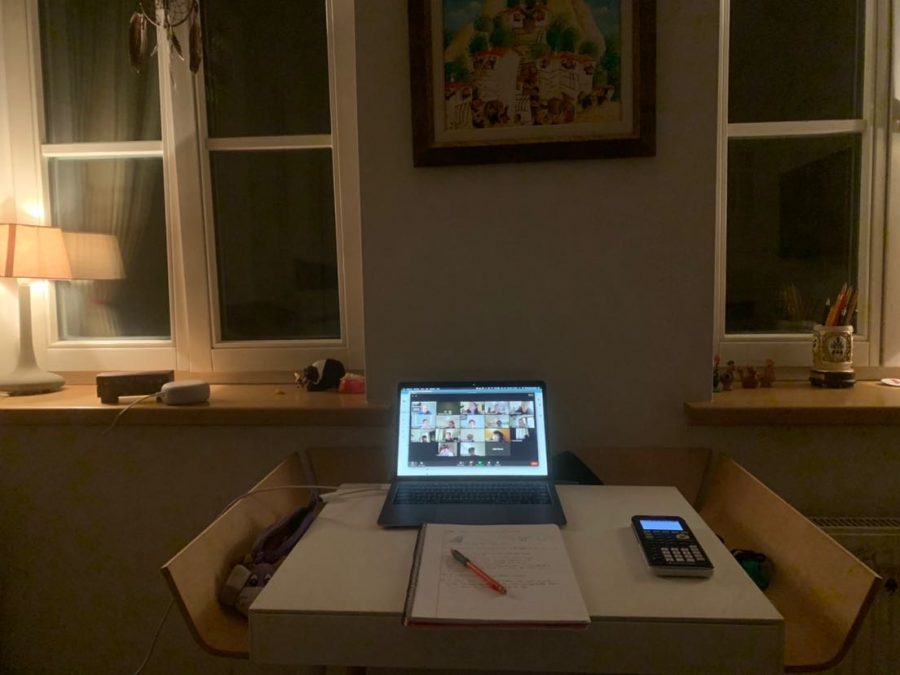 For many, 7 pm is when the day begins to settle down. Students can usually be found finishing their last bits of homework and cramming for any tests due the next day. However, for Emma Lu (’21), Dominykas Gaidys (’21), and the numerous other international students at Viewpoint School, the school day is about to begin. The Patriot invites you to get a glimpse into the seniors’ unconventional schedule and how they’ve adapted to attending Viewpoint from across the world.

12:00 am: Lu attends her first class. “There’s a 15 hour time difference between Shanghai and Los Angeles, (so) on weekdays I won’t really leave the house because the time where I’m usually up is at noon or during midnight,” says Lu. She adds that, at first, attending school at night was difficult, but she has gotten used to it now, citing her switch to living as if she were in an American time zone despite being physically in China as the solution.

1:10 am: On days without a free period, Gaidys finishes school from Lithuania. “After that, I go to sleep and start the day over again,” he continues. Similarly to Lu and unlike students following a traditional schedule, Gaidys doesn’t complete his homework the night before school, but rather the day of.

6:00 am: As Gaidys sleeps, the school day is over for Lu and she begins to prepare her breakfast. Even though she feels more adjusted to her current plan, Lu still experiences the difficulties that come with nocturnal learning. “It’s a lot harder for me to focus and get my head wrapped around Calculus or Biology problems at 2 am and even at 5 am. It is like staying up all night and taking a test after that,” she says. She believes that teachers have been very accommodating to her situation, especially after making the switch to take a class independently due to time zone issues.

7:00 am: Lu begins to do homework and study for any upcoming tests. “But I’m always not so concentrated because I literally pulled an all-nighter,” she adds. Time is not the only problem Lu faces, she also has to work around China’s firewall that bans many foreign sites and apps like Google search, YouTube, and Zoom. “In general, WiFi and VPN are always a problem for me — they are not very stable. Oftentimes I’m (not) able to access Google Docs or AP Classroom and it is giving me a hard time, says Lu. She also worries about her internet’s stability during tests: “I am constantly afraid that my WiFi would just crash — which has already happened once.”

10:00 am: Gaidys wakes up and gets ready to start another day as Lu continues doing work. While he’s asleep, Gaidys shares that many of his classmates in the American time zone try to message him, unaware of the large time difference. “I’m very used to working in a cooperative environment with people and projects — that’s just a nightmare now. People will be asking me at 5 am ‘are you awake’?” Gaidys says. “You could even assume it to be social ostracism,” he says in referring to the now large distance he is from classmates and friends he used to see on a fairly regular basis.

11:00 am: After eating breakfast, Gaidys starts his homework. Lu, on the other hand, wraps up her work and begins to get ready for bed.

12:00 pm: Lu has called it a night and Gaidys begins to do school work. When faced with the option Viewpoint provided for international students to take their classes asynchronously, Gaidys decided to take his classes live. “My brother also has online school in the morning and my mom does work for home,” he says. Gaidys feels, “like it would be too much at once and with the opportunity to go to school at night, as inconvenient as it can be due to time differences, especially after lunch, it’s quieter and I’m more able to focus, which sounds ironic considering how late it is.”

2:00 pm: Gaidys heads off to his internship, a non-for-profit organization helping Lithuanian youth develop their voice in their community.

6:00 pm: Lu wakes up and eats her first meal of the day: dinner. Gaidys arrives home from his work and finishes up any assignments he didn’t complete earlier.

7:00 pm: School has finally started for Gaidys. He says that his ability to stay focused throughout the night varies depending on his workload earlier that day. However, he has yet to find taking tests at night too challenging. Excluding an 11 pm AP test he took last school year, Gaidys believes that, “every test during online school has been dumbed down — the ability to have notes (makes) the tests much easier.”

10:00 pm: Lu studies for any tests or quizzes she has that day and Gaidys scarfs down his dinner. “I eat dinner in the 5-minute break between the first two blocks — or if I have time I’ll eat it during I Block,” he says.

Regardless of the inevitable issues that come with cross-time zone-learning, Gaidys, similarly to Lu, believes that Viewpoint has been very helpful in solving students working outside the U.S.’ needs: “I don’t have any complaints, especially with the shortened Wednesday I end at 10:30 pm,” he adds.

The international students’ ability to dramatically adjust their daily routines for the sake of online learning is yet another example of students’ perseverance in this unprecedented school year.