The Slow Return of Live Theatre 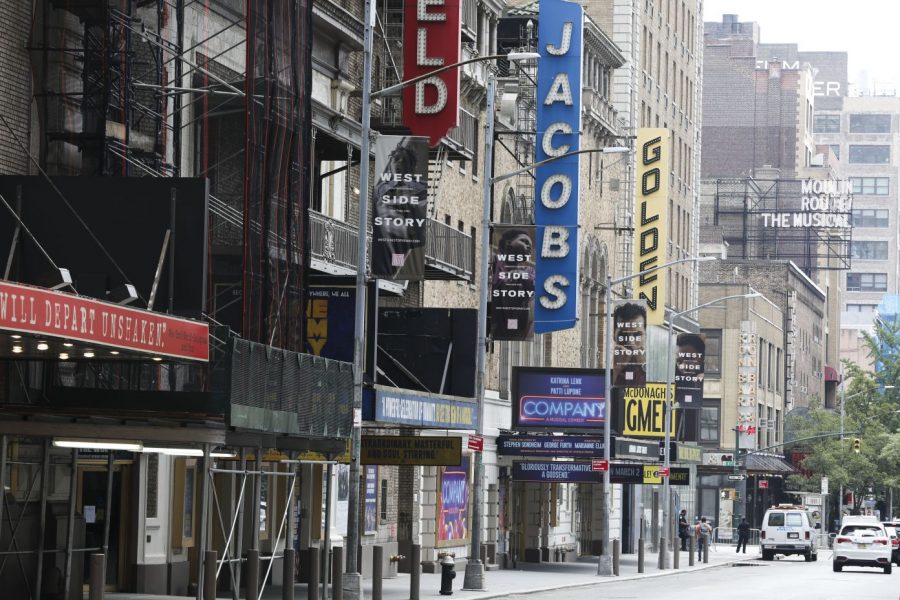 As the COVID-19 vaccine rolls out at a rapid pace across the country, small businesses, schools, restaurants, and everything in between attempt to reopen. However, the return of live theatre, mostly indoors, is less promising.

The president of the Broadway League, Charlotte St.Martin, quotes, “With nearly 97,000 workers who rely on Broadway for their livelihood and an annual economic impact of $14.8 billion to the city, our membership is committed to re-opening as soon as conditions permit us to do so. We are working tirelessly with multiple partners on sustaining the industry once we raise our curtains again.”

The struggle to employ and entertain goes hand in hand. Aside from financial strain, the upcoming first anniversary of the global lockdown has drastically affected performers mentally. The two questions individuals involved in the performing arts ask daily are, “When will performers be able to step back on stage with a live audience?” and “What precautions are being taken to ensure that this is as soon as possible?” While these questions may not have a definitive answer as protocols change daily, the hope of a near-future involving Broadway provides optimism to performers and their audiences.

An article by CNBC states New York’s intentions of using large-scale testing to reopen entertainment venues. Other protocols likely to be put in place would include smaller audience sizes, proper air ventilation, along with a negative COVID-19 test. In late January, during a press briefing, New York governor Andrew Cuomo answered, “Would I go see a play and sit in a playhouse with 150 people? If the 150 people were tested and all negative, yes, I would do that…I think reopening with testing is going to be the key.”

Words like these bring hope to the performing arts community, as taking action is an essential part of making changes in the world’s current state. In a more recent briefing on March 3rd, Cuomo announced the start of pop-up performances this spring. Beginning April 2, entertainment venues in New York can start the process of reopening at a 33% capacity. The NY Pops Up initiative allows theatres, such as the Music Box Theatre, to open as “flex venues” with performances that started last month and will continue through Labor Day. Still, specific dates of the reopening of musicals are unknown.

The actors, actresses, stagehands, directors, musicians, writers, and thousands of others who bring Broadway to life cannot support themselves and their families financially. As New York City’s living cost is remarkably high, many younger workers have moved back home with their families until further notice. Finding any way to maintain some income, countless actors and actresses have resorted to any employment available, ranging from teaching online workshops to accepting jobs outside of their industry.

Performers agree with Ashley En-fu Matthews, from the “Rock of Ages” revival at New World Stage, “This is about an entire countrywide industry that has been left in the dust and is facing catastrophic loss for over a year. Broadway, off-broadway, national tours, regional theaters. Actors, dancers, singers, musicians, wardrobe, hair, crew, stage management, front and back of house theater staff all around the county have no end in sight and no support from their government.”

Others like Abby Mueller, who played the role of Jane Seymour in Six: The Musical, mention, “I had a year’s worth of work lined up, as well as a year of health insurance, and it’s all up in the air…Arts workers and institutions are fighting for their very survival.” These two performers advocate for the millions of performers nationwide who are dealing with similar financial struggles. Alongside the industry’s economic strains, lack of motivation has taken its toll on the performing arts community after a year without stepping on the stage.

The amount of dedication it takes to pursue a career in the arts is extreme, but many say all of the sacrifices pay off once they step on stage. Without the reward, many don’t feel it worth pursuing a career of such rigorous effort. However, it is times such as these where social media can benefit communities, as everyone from aspiring performers to professionals share the same grief when away from the spotlight.

Finding hope, inspiration, and escapism through theatre is more challenging than ever during these times, making connections through social media vital to keep the arts alive.