The Issue Between Art & Pornography: The Lawsuit over the Nevermind cover art 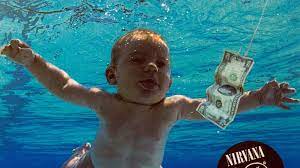 The Iconic rock band Nirvana isn’t new to controversy. Known for their grunge Seattle sound, they were launched into rock megastars from their iconic single “Smells Like Teen Spirit. The hall of fame inducted band is currently being sued by the baby who is photographed nude on their album cover “Nevermind”. The baby, Spencer Elden, who is now 30 years old, is suing all the living members of the band for 150,000 each, and also Geffen records. He is suing these individuals for profiting from the album cover, which he claims is “child pornography and exploitive”. This lawsuit he has filed comes just a few weeks shy of ‘Neverminds’ 30th anniversary of its release. Some call Elden’s lawsuit a money grab, especially knowing he has posed several times, even in recent years recreating the iconic album. This stirs up the financial motive that people speculate is behind Elden’s unexpected lawsuit.

The legendary music group was formed by lead singer and guitarist Kurt Cobain accompanied by bassist Krist Novoselic. The highschool friends formed the band in 1987, in Seattle Washington. After going through a few drummers, music legend Dave Grohl ended up being the drummer that stuck, and is known for his involvement in Nirvana along with being the Foo Fighters frontman. These three men were a part of one 2q0of the most influential bands in music, part of the Seattle music movement in the early 1990’s that created the rock subgenre “Grunge”. Cobain has been quoted telling The Rolling Stone that he drew inspiration from groups such as the pixies. Cobain was heavily influenced by the ‘Where is my mind’ group when writing their iconic song ‘Smells Like Teen Spirit’ which is featured on the Nevermind album that is the center of Elden’s lawsuit.

Elden’s lawsuit stems from picturing nude on the album cover grabbing at a dollar bill on a hook. He claims in the court documents that he is being portrayed as a sex worker, and the fact that he is only an infant makes exploitative and child pornography that they all profited from. He is going directly after the living members of the band and Cobain’s widow ‘Courtney Love’ along with Geffen records; at the time of the cover, no one was aware of the success Nirvana was about to encounter, and Elden’s parents were paid $200 for having their son model for the cover.

The idea for the cover shot was brought to the mind of Kurt Cobain while watching a television program on water births with drummer Dave Grohl. The nude infant (Spencer Elden) represents the purest form of us as humans, and society’s vulnerability; the baby floating untouched in the water represents the freedom he possesses as an innocent baby. The whole picture represents the people chasing money sooner and sooner.