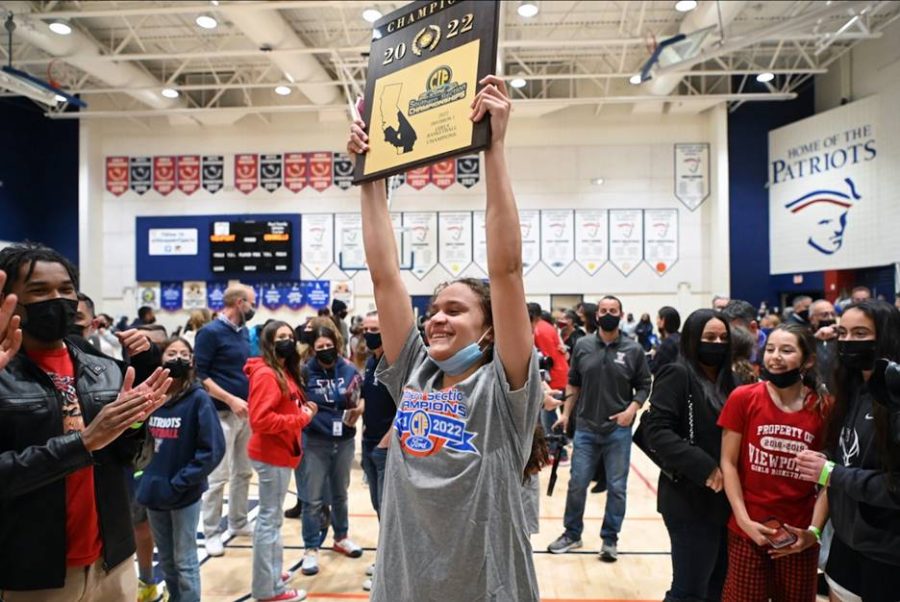 Viewpoint took the lead with a three-pointer from Karlee White, with Camarillo responding with a jump shot next to no time. The closely contested first quarter resulted in both teams tying 10-10. Karlee White would have her career night by the end of the game, scoring 37 points and becoming the integral player to Viewpoint’s win during the final.

Demonstrating tremendous spirit, contrary to the first quarter, Camarillo took the initiative in the second quarter by making two free throws. Viewpoint had at least a five-point lead in the second quarter in a series of brilliant displays, only to be matched equally after Gabriella Jaquez of Camarillo threw in a tremendous three-pointer to silence the home support. The quarter ended with 21-21.

Both teams went on full offense in the third quarter, averaging 20 points each, but Viewpoint converted their shares of chance, scoring 22 points in the quarter. Karlee White’s two free throws ensured that the quarter ended in Viewpoint School, taking the lead 43-39.

Karlee White made sure to extend Viewpoint’s lead; at one instance Viewpoint led Camarillo 51-45. Senior Kayla Keshmeshian’s two free throws eliminated the final suspense, 53-45. With 46 seconds left, Camarillo scores a consolation point; Karlee made sure the victory is sealed by making late two late free throws, 55-47. Viewpoint School had acquired another impressive achievement: restraining Camarillo’s star player Gabriella Jaquez. A senior committed to play for UCLA, and ranked one of the best in the nation, Jaquez was averaging 31 points per game; however, Viewpoint’s defense proved a barrier too high to overcome.

Viewpoint’s basketball coach Will Burr was elated after the game; speaking to the Patriot in his lost voice, Burr was emotional when asked about the amount of effort the girls put in “I am so happy for them, for the girls, and everybody. They invested so much into this team since day 1.”

“Ever since June 1st, when Kayla Keshimeshian organized a team meeting, you can feel the energy and passion from this team that this title is what they were after,” said Burr as he looked towards his player with pride.

The home crowd raptured in joy as the final buzzer sounded, Viewpoint supporters filled PFAC with supports as they cheered on the bleachers. “This is the loudest High School sports game I’ve attended; it is an amazing feeling, put a ring on my fingers!” said Senior Aiden Weitzman – captain of the supporter group The Navy – cheering the team from the stand.

“It was an outstanding win; they deserved this.” said Senior Andrew Klaey to the Patriot. “The other team had talent, but we simply wanted it more; I loved the attitude, the spirit, the drive. Everything about this team makes me think that we are a winning team.” The school administration was also present at this historic victory. Mark McKee, who was cheering at the corner of the homestand, spoke to the Patriot after the game. “It was great to be in the first-ever D1 Championship final; it is even greater to be at home. This is a sweet victory against this great team. Hard work really pays off. I’ve seen them practice during the pandemic; champions are made of practice. This is a great lesson in life.”

Kayla Keshimeshian and Karlee White embraced each other after the game “We were never nervous; we’ve put it together, our defense was awesome. I know that Camarillo was the no.1 seed, but this performance showed everybody that we should’ve been the no.1 seed.” Kayla Keshmeshian spoke as she held tight the trophy. “Everybody wanted this so bad. It is a team win.” Karlee White added.

Viewpoint School has also made the state. This victory has further boosted supporters’ confidence in girls’ ability to do something spectacular in this competition.