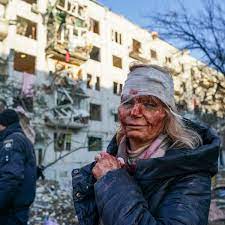 Blood paves the streets of Ukraine as conflict claims hundreds of lives daily.  The Russo-Ukrainian War is nearing its second month and Russia shows no signs of ceasing its brutal attacks, many of which are directed at civilians. Russia’s actions, governed by President Vladimir Putin, have sparked internationaloutrage. The West has imposed sanctions and withdrawn nearly all financial support from the country, cutting it off from the rest of the world and dealing a massive economic blow.  Thousands of Russians have taken to the streets to protest, chanting “Nyet Voine!” (“No to War!”) and facing harsh consequences for speaking out in the process. Media censorship is now the norm, with internet and social media sites being banned. It’s clear by their response that the war is primarily supported and governed by the Kremlin, not the Russian people.

The motivations for this attack have been unfolding for centuries, only intensifying since Russia annexed Crimea, a Ukrainian peninsula, in 2014.  To understand exactly why this is happening, it’s important to look back to an article that Putin himself published, written in July 2021. In it, Putin provides an overview of Ukraine’s historical ties with Russia and lays out several key motives behind his interest in reuniting them. The historical background between the two countries is complex, but stems from the territory of Kievan Rus.  Russia and Ukraine were both under this regime, holding the same Orthodox traditions and language (Russian is still the second language of Ukraine, spoken primarily in Crimea and along the eastern Ukrainian border).  Ukraine was just one branch of a political giant.

Even when Ancient Rus dissolved, cultural ties led to the formation of the triune Russian nation.  Ukraine was one of the three parts, referred to as Malorussia, or Little Russia.   The term “Ukrainian” back then was actually “Okraina”, referring to Russian border guards.  Despite the influence of other European countries, Russo-Ukrainian culture continued to grow and flourish at a rapid pace, uniting the countries even further.

But around the time of the Soviet Union, the idea that Malorussia was actually a separate, independent nation began to spread, not only through Malorussia, but throughout the Western world as well.  Putin scorns this idea in his article, writing that “such ‘hypotheses’ became increasingly used for political purposes as a tool of rivalry between European states”.  But these ideas were clearly powerful, for in 1917, representatives from the Ukrainian People’s Republic arrived in Brest-Litovsk and declared independence from Russia.

Much back and forth ensued in Ukraine’s quest to establish itself as fully independent, which would come after the fall of the Soviet Union, but the key point in Putin’s mind is right in 1917.  He fails to recognize the legitimacy of that independence and thus sees it as a West-backed move to tear apart Russia.  Putin expressed frustration, both in the letter and in a press conference on February 21st, that Ukraine is being split and pulled apart from the old glory of the Soviet Union, which he longs to reestablish.  Now he’s trying to use it for his own gain.  One day before the official invasion, Putin signed a decree recognizing the independence of two Russian-backed, separatist regions on the eastern border of Ukraine, Lugansk and Donetsk.  Putin  psuhsed senseless accusations of “Nazi” Ukranians  in these sepratist regions, another example of propaganda from the Kremlin. He then moved troops into Donbas, which is controlled by both regions, sparking alarm that an invasion was imminent.

Putin recognizes the strong, political divide between eastern and western Ukrainians and doesn’t like it.  He disapproves of President Volodymyr Zelenskyy’s actions to ally with the rest of Europe and clearly sees Ukraine pulling away as a threat to everything he’s held dear, namely the cultural union of the former triune Russian nation.  In the article, he writes, “It would not be an exaggeration to say that the path of forced assimilation, the formation of an ethnically pure Ukrainian state, aggressive towards Russia, is comparable in its consequences to the use of weapons of mass destruction against us”.

There are other reasons why Ukraine would be advantageous to the Russians, besides Putin’s determined mindset.  The recent discovery of European oil deposits in Crimea, the Russo-Ukrainian peninsula, is one of them.  Another reason is Ukraine’s strategic location as a buffer between Russia and the rest of Eruope.  If Ukraine were to join NATO, a proposition which was discussed greatly prior to the invasion, it would allow Western troops to press up against the 1,500 mile Russian border.  Putin wants distance from which he can orchestrate his plans, and this would escalate tensions between him and NATO, his most influential enemy, even further.

Yes, Putin loves Ukraine, but he loves the idea of a non-Western Ukraine even more, and so he contradicts his words by spreading death and destruction in a country he aims to “save”.  His continued attempts to justify a war filled with rape, civilian executions, and alleged chemical weapon use have branded him as a war criminal in countries around the globe and guranteed Russia’s global isolation for months to come.  In what he himself has described as his “noble effort” to save the glory days of old Russia, he has only sunk it lower in the eyes of the world.