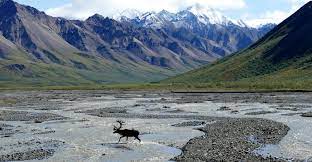 The Alaska National Wildlife Refuge (ANWR) is threatened by oil and gas development after legislation was passed in 2017. A previous article on the Patriot interviewed the Wilderness Society’s Karlin Nageak Itchoak. He spoke about the fight of keeping the ANWR free of oil and gas development and the many issues that this drilling will cause in the refuge. After the article was published, 40 people read and filled out a survey. The 40 people are currently high school students at Viewpoint School who are taking sciences.

The Arctic has a long standing feud between oil developers and environmentalists starting in 1968 when oil was discovered at Prudhoe Bay. Prudhoe Bay became the largest oil and gas development in Alaska. It was soon hypothesized that petroleum could be found in the refuge, too, since it is about 75 miles away. Over 55% of the people who filled out the survey were hardly aware or no awareness at all.

Alaska is a huge supplier of oil and gas. As aforementioned, one of the biggest oil and gas developments in North America is Prudhoe Bay consisting of about 25 billion barrels worth of petroleum. To the contrary of the last question, 55% of the people who filled out the survey were moderately aware or very aware that oil and gas development is prevalent in Alaska.

Another effect that oil and gas drilling causes is noise and light pollution. This has a variety of different effects such as affecting the wilderness character and the wildlife nearby. Over 80% of people know that oil and gas development causes a lot of noise and light pollution. However, this data does not show if the surveyors know what effects this has.

The Exxon Valdez Catastrophe was an oil and gas spill that happened in 1989. The spill put approximately 11 million gallons of oil into the ocean off of Alaska. This had devastating impacts for wildlife at the time and long lasting effects, too. The chart shows a large variety of different answers. 65% of the surveyors were somewhat aware, moderately aware, or very aware.

The surveyors filled out one last question with 92.5% of the people saying that oil and gas development should not happen at the ANWR.