A million people flood the streets of Beirut, Lebanon for protests 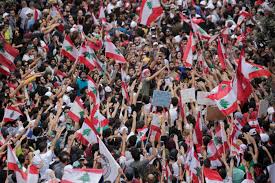 On Sunday, October 13 during the evening, fires started towards the north of Lebanon, and trailed down towards the Beirut area and closer to the south. The fires escalated quickly, and resulted in blocking the entrances of Saida, Chouf, and Beirut. The fires were so extreme that it resulted in at least one death, which was reported in Chouf. The Lebanese Civil Defense lacked strong defense against the fires due to not having the right equipment in order to fight a fire this big. Lebanon needed foreign help, and countries like Cyprus, Greece, Jordan, and Turkey aided the firefighting. The foreign help was the reason why the fires were put out, and if Lebanon was left on its own to fight it, there would have been a lot more damage, injuries, and even deaths.

This resulted in furious Lebanese citizens; they wondered where their taxes and what were going if the government was not able to help in a time so serious like the fires. It is well known that Lebanon is very corrupt, and the country has been like this for years. The people finally had enough with the government, especially the Prime Minister, Saad Harari, who called for foreign help during the fires. The people were angered by some planned taxes, such as online calls, gasoline, and tobacco taxes. These unwanted taxes were the last straw for citizens, and are known to spark the 2019 Lebanese Revolution.

The protests are being held on the streets of Beirut, with an attendance of over one million people. Hariri resigned from his Prime Minister position which the President, Michael Aoun, signed off on. With that done, the Lebanese citizens are still demanding change and stay protesting in the streets. Now, Hezoballah has not appointed a new Prime Minister, and until real economic and social change happens in Lebanon, protests will still occur, and problems like road blockage from the protesters will still occur. Protests around the world stemmed from the protests in Lebanon, and happening all over countries like France and the United States.

If you want to see videos from the Los Angeles protests, go to the @viewpointpatriot Instagram.